As the title notes, this semester has been mostly quiet, publically quiet. That’s not to say memories haven’t been made–Pulitzer-winning chamber choir Roomful of Teeth privately read a new work of mine, a new batch of ducks took the stage for the first time, and I premiered my first solo audio/video work to a small crowd in a mostly abandoned building (see below). But the first semester is about building (I hope), and build we have: 2019 will be my farthest reaching season to date–

Spring Break: workshop on a new beer-themed work with the illustrious invoke quartet

April 8: the Mizzou Philharmonic premieres my very first piece for orchestra, yr Mallet, yr Hammer, which was subject to some nice press in the Columbia Daily Tribune.

May: premiere of bridge sings for tuba and tape by my former euphonium teacher and Dallas Brass tubist Paul Carlson // premiere of a new work by the Mizzou New Music Ensemble

I would be remiss to leave you, dear viewer, with no media to chew on from the past few months, so I give you a not-quite-fully-tweaked (but complete!) rendering of my new audio/video work, the color you thought you thought. The work was premiered alongside those of several colleagues and friends in the condemned LOEB building, as the culmination of a course titled INTERMEDIA. The work was projected across a cavernous room, the audio reverberating amongst cement columns, but the piece also lives humbly in our computers as you’ll see below. 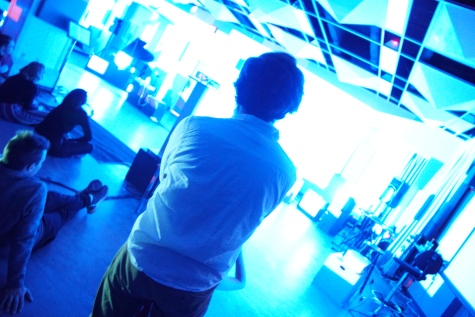 Program note: the color you thought you thought (video w/ mono audio) ties auditory and visual data together in an exploration of color and sound memory. Our brain often simplifies color data into broad categories (e.g. blue, red, etc.), which inhibits our ability to distinguish and remember the subtle differences between hues. I suspect that this neurological phenomenon, dubbed “color bias,” extends to other sensorial domains as well.

Like the communal categorization of color, Westerners most often discuss music in terms of their relationship to the twelve tone equal tempered system. Western music has been composed in this system since the 18th century, and the language surrounding classical music practice is built on this premise. Like color, I suspect that this results in “pitch bias,” which inhibits our ability to identify and remember minute differences in pitch.

The senses are also an area subject to conceptual separation, but recent findings in neuroscience and anthropology suggest that the strict separation of sensorial data (e.g. sight, hearing, etc.) leads to an incomplete understanding of how we consume, process, and experience media—neurologically, culturally, and individually. In this piece, the correlation between sound and visualization are concrete.

Sept. 24 A fresh Mizzou New Music recording of Construction is featured at a Mizzou fundraising celebration

August 1 My audio-visual thesis, moves, is premiered by Khemia Ensemble at the digital MICF finale